Little Things lead roles is played by Mithali Palkar as a kavya Kulkarni and Dhruv Sehgal as a Dhruv Vats. The story of Little Things revolves around these two characters.

Little Things story is based upon:

The story of Little Things is based on these two characters, the first one is Kavya and the second one is Dhruv from Mumbai. They are in a live-in relationship. So, the story is going to depict the ups and downs of both characters into their relationship and career. This web series is available with a combination of two languages the first language is Hindi and the other one is English.

Highlights of Dhruv and Kavya:

Dhruv is a very funny character and also an irresponsible boy with no future plans but Kavya is totally opposite of Dhruv as she is very responsible for her professional life and she has good future plans and is always eager to explore new things. 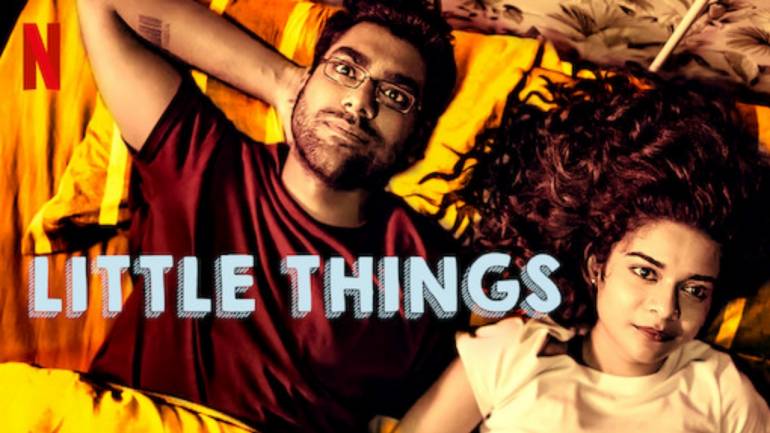 Little Things season 1 was directed by Ajay Bhuyan and written by Dhruv Sehgal. The total number of episodes available in season 1 is 5.

All About 5 Episodes of Little Things Season 1:

Ep. 1: The first episode is “FOMO” where both lead roles are very busy while planning their weekends to make it exciting.

Ep. 2: The second episode is “Have a Nice Day”, in this episode we will get to see that Kavya and Dhruv are busy in their own work and do little caring things to make each other feel happy and comfortable between the stress of there work.

Ep. 3: The third episode is “Good Night”. In this episode, you will find that Kavya’s ex-boyfriend is getting married and then the long conversation about their exes follows throughout the episode.

Ep. 4: The fourth episode is “Thank You”. In this episode, Kavya convinces Dhruv to attend her friend’s house party.

Ep. 5: The fifth and the last episode of season 1 is “Here We Go”. In this episode, kavya discusses with Dhruv that she doesn’t have any idea that what she wants to do in her life, and Dhruv gives some great suggestions to her.

Little Things Season 2 is directed by Ruchir Arun and written by Dhruv Sehgal. The total number of episodes available in season 2 is 8.

All About 8 episodes of Little Things Season 2:

Ep. 1: The first episode is “Milk Cake”, where Dhruv’s childhood friend comes to visit him from Delhi with Dhruv’s favorite milk cake.

Ep. 2: The second episode is “Back Seat”, where Kavya gets a big project promotion, and Dhruv losses his job due to lack of interest.

Ep. 3: The third episode is “Cheeti Aur Haathi”, where kavya is busy managing her big project, and Dhruv is still struggling to find a new job.

Ep. 4: The fourth episode is “Mumbai Darshan”, where kavya’s mother visits their house and Dhruv takes her out for the tour.

Ep. 5: The fifth episode is “Leicester City F.C”, where Kavya finds a crush, and then she discusses it with Dhruv.

Ep. 6: The sixth episode is “Bed & breakfast”, where they canceled their weekend plan and decided to stay at home.

Ep. 7: The seventh episode is “Baalti Aur Magga”, where they had a bad fight when they are going to attend Dhruv friend’s wedding.

Ep. 8: The eight-episode is “Where Are We”. In this episode, while returning from the wedding to their home Dhruv stops his car at a familiar place just to talk with Kavya and says sorry to her.

Little Things Season 3 is directed by Sumit Aroraa and written by Dhruv Sehgal. The total number of episodes in Little things season 3 is 8.

All About 8 episodes of Season 3:

Ep. 1: The first episode is “Migration”, where Dhruv has to go to Banglore as an assistant of Professor Geeta and Kavya helps him to settle there.

Ep. 2: The second episode is “Today Of All Days”. In this episode, Dhruv easily adapted the new surrounding and approached the new friends while Kavya was still struggling alone at home.

Ep. 3: The third episode is “Rectangles” where Dhruv is busy in his research and kavya found her self alone at rectangles, which means at home.

Ep. 4: The fourth episode is “Senior Citizens”. In this episode, kavya visits her hometown to join her father’s retirement farewell party.

Ep. 5: The fifth episode is “Vertical Housing”. In this episode Dhruv visits Delhi to help her mother in packing.

Ep. 6: The sixth episode is “Jet Lag”. In this episode, Dhruv and Kavya are enjoying there nostalgia moments and missing each other.

Ep. 7: The seventh episode is “The Sum Of Our Past”. In this episode, flashbacks illuminate everything of Dhruv’s and Kavya’s initial experiences with their relationship and marriage.

Ep. 8: The eight-episode is “Migration II” is about Kavya’s transfer to Nagpur.

We can’t count the reason for binge-watch this Netflix Web series because it is seamless. This web series will let you experience real-life situations that happen with almost every couple and this star couple will teach you to overcome every tough situation of life while holding the hand of your partner.

Death Note Series Review: Best Anime Ever That Will Thrill You Every Second